Mental well-being and the power of green spaces

What makes you feel better, looking out of your window to see a vivid landscape of greenery? Or staring out your window and being confronted by endless concrete?

The economic and environmental positives of green spaces such as green roofs are well-documented — they absorb CO2, air pollution and excess storm-water while helping to cool overheated urban buildings — which is why cities such as Copenhagen and Toronto have made them compulsory on most new buildings.

But what about their psychological benefits? It seems completely logical that if we look at greenery rather than grey concrete we would feel better, but how much better?

One of the most famous studies into this area was carried out by the environmental psychologist Roger Ulrich. Referencing quantifiable outcomes, Ulrich found that hospital patients with a view of natural vegetation recovered a day faster from surgery than those whose only view was brick and concrete.

Following this research, Ulrich and fellow researchers have gone on to examine the impact of natural hospital landscapes on reducing stress — for both patients and hospital staff — improving blood pressure and a study found a garden for a children’s ward helped reduce emotional distress compared to staying inside the hospital.

Another study of 900,000 people in Denmark found that green spaces in an urban environment provided significant positive mental health benefits for children, while those with least access to greenery had as much as a 55% increased risk of issues such as depression or anxiety.

The report stated: “Green space most strongly protects again mood disorders, depression, neurotic behaviour and stress… psychological restoration may be the strongest protective mechanism that green space offers. The effect of green space is also dose-dependent, meaning those who have longer exposures to green space have greater mental health benefits.”

In other research, green spaces particularly gardens, were found to be beneficial to the health and well-being of the elderly, especially those suffering from dementia, while the World Health Organisation’s regional office in Europe recently drew up a report highlighting how increased urban greenery — such as “street trees, green walls and roofs” — in certain European streets led to lower rates of antidepressant prescriptions.

Knauf Insulation’s Urbanscape Green Roof solutions and concepts have enjoyed considerable success in recent years and have been installed in front of Dubai Opera House in the UAE, at Washington DC’s John F. Kennedy Center for the Performing Arts, Tokyo’s Roppongi Boatrace Office Building in addition to hospitals including 20,000m2 of green roof at the 1,600-bed Karolinska University Hospital in Stockholm.

Jure Šumi, our Green Solutions Business Development Director, said: “Urbanscape can be adapted to any building and to any area such as a park or open social space as it is incredibly flexible and looks great.

“Our customers appreciate that our green solutions contribute to the capture of CO2 emissions as well as air pollutants and help bring down the temperature of buildings by mitigating Heat Island Effect — cooling down urban areas that are hotter than the surrounding countryside.

“Urbanscape also provides great insulation which generates energy savings and helps absorb storm-water, which eases the load on public sewage systems. Add all these positive factors together along with the fact that green roofs make you feel better than concrete and it is impossible to ignore the positive contribution that green roofs can make to any urban environment.”

Picture in the header: our biggest green roof in Japan built on top of Roppongi Boatrace Office Building in Tokyo 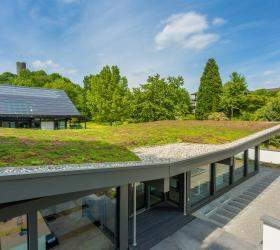