Here’s the economic weather forecast for the construction industry in 2019 for the 19 countries covered by Euroconstruct: the outlook will be still positive with a growth of 2%.

After the scorching days of 4.1% peak growth in 2017 and a sunny 2.8% this year, 2% may seem distinctively cool but it’s still reassuring news for construction.

Davide Maiello, our Head of Market & Business Intelligence for Europe & CIS, says: “Look, the industry will eat a bit less than in the past but it will continue to have a good meal on the table, it’s just that instead of 10 oysters for dinner it will now enjoy five.”

“The industry has been pushing forward extremely quickly recently and now many economists suggest that this correction of slower growth will mean better growth — giving space to consolidate the rapid gains of the past two years.”

Longest period of expansion since 1997

Reinforcing this sense of confidence is data crunched by the Purchasing Managers’ Index which surveys categories such as orders, output, stocks and employment on a monthly basis. Davide says the index has been above the long-term average for 25 consecutive months.

“The market is in the middle of its longest period of expansion since 1997 and 2018 will be the first year that investment in construction will overtake the boom year of 2007 — if you exclude the distorting figures of Spain, Ireland and Portugal which experienced unprecedented boom and bust that year.”

So, what factors will influence the future? “Well consumer confidence is good even if it might now be reaching a plateau,” says Davide. “In 2016, 2017 and 2018, construction trends have been more positive than GDP fuelled by strong consumer confidence. Now from 2019-21 construction evolution is expected to be completely in line with GDP.” 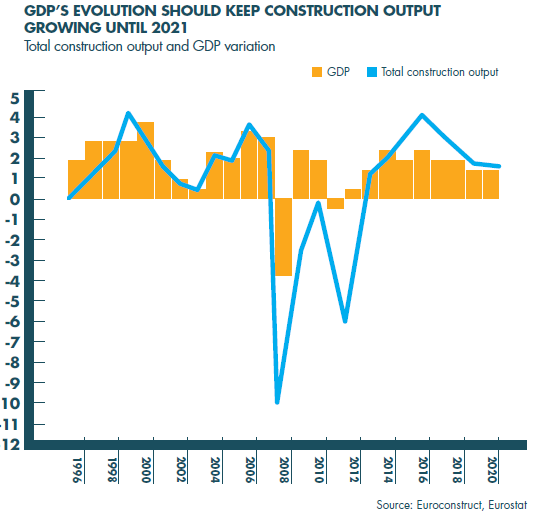 Overall the previous forecast for the future has been broadly confirmed. Breaking down the trends driving growth makes for interesting reading particularly since Euroconstruct has revised the forecasts it made in June to state that average growth of new residential building from 2018-20 is expected to perform slightly worse than was predicted down from 2.4% to 2.3%; new non-residential has a better forecast, up to 1.5% from 1.2%, and renovation will remain static at 1.3%. 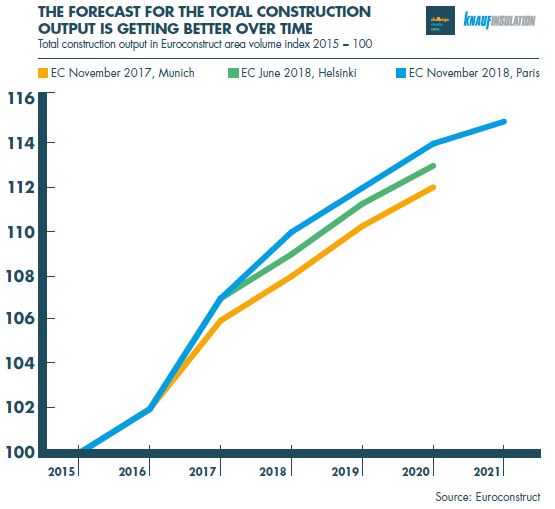 So what else are we seeing? Here are four trends Davide has pulled out of the research. 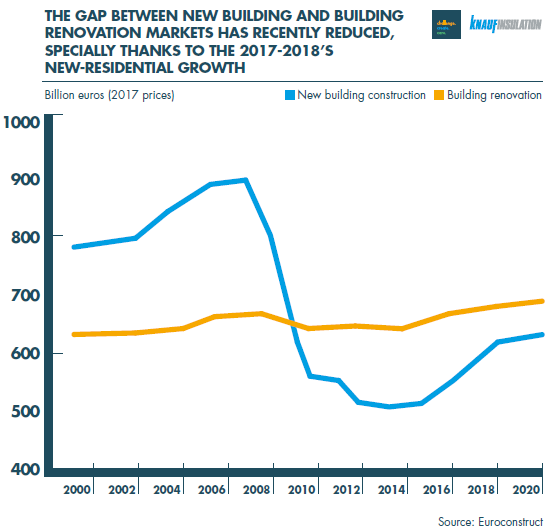 What are we building? Demographics are moving more towards small home apartments. In 2015 54% of dwellings were flats and 46% were one- or two-family houses. In 2021 58% will be flats and 42% will be family homes. 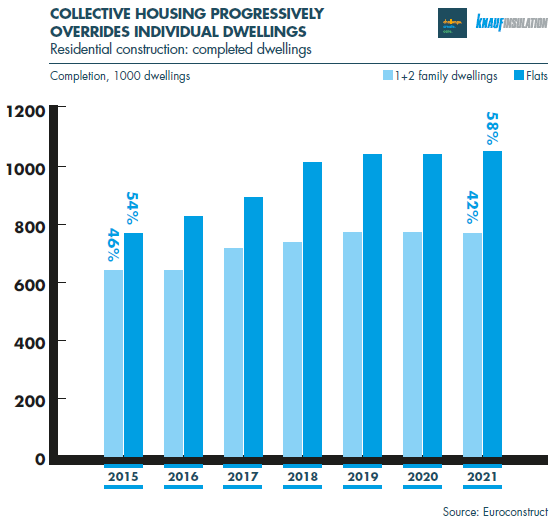 On a country level the 2019 Euroconstruct forecast has been improved for the Czech Republic, Poland, Hungary and Slovakia which are expected to grow by 9.1% compared to 1.5% in the West. The economies in UK, France and Germany are flat or moderately growing while some smaller construction markets like Spain, Portugal and Ireland still have a lot of catching up to do.

Where’s the money coming from?

At present there is 95% of investment in Western Europe and only 5% in the East but the contribution to growth over the coming years will see a split of 70-30 from West to East — in other words, 5% of the market will deliver 30% of the growth in construction market.

Of course, construction, like any other industry is also impacted by macro factors. Davide says: “On a global level, confidence is a little less than in the past couple of years and there are challenges such as the ‘trade roller coaster’ between US and China and on top of it credit conditions are a little tighter.”

“In Europe there are also issues such as 2019’s Parliamentary elections, uncertainty around Brexit and France working through its economic reforms — the IMF downgraded expected GDP growth in Europe for 2019 by 0.1% mainly due to France. In essence, also here, there is lower growth but still growth.”