According to anecdote, if you put a frog in boiling water it will leap out to save its life. But warm the water gradually and the frog doesn’t realise the danger. That lack of awareness ultimately proves fatal.

According to anecdote, if you put a frog in boiling water it will leap out to save its life. But warm the water gradually and the frog doesn’t realise the danger. That lack of awareness ultimately proves fatal. It’s not a cheerful story, but isn’t that what we’re doing to ourselves by allowing emissions to slowly heat up the planet?

We’re slowly killing ourselves. And every minute we delay taking action, the water heats up another fraction of a degree. Soon it will be too late. Every time we wait five years the task that we have in front of us gets harder and harder. This is why action NOW is so essential rather than waiting for another five years to fly by.

“In business when you know you have a problem, you sort it out; if you wait it has a tendency to sort you out. We face the same dilemma with climate change; the time to debate the problem is over, it’s time to sort it out,” says Tony Robson CEO of Knauf Insulation.

Already climate change is being heralded as freak weather, famines, floods and environmental devastation. If the temperature rises unchecked, that amphibian anecdote becomes a reality for many species, even humans.

Over the next two weeks world leaders will meet in Paris for the 21st Session of the Conference of the Parties to the United Nations Framework Convention on Climate Change – or COP21 for short – to draw up a new international climate agreement to keep on the path of limiting global temperature increases to below 2°C by the end of the century. Governments agreed to the 2°C target in Copenhagen in 2009.

“It has to succeed and countries have to commit to binding emission reduction and then back these decisions with political will and serious investment,” says Tony Robson. “If we don’t act now we will leave a deadly legacy for generations to come.”

We need an ambitious but honest agreement, we need to focus on the areas where we can gain the most such as building, recognising that Paris will not be the ultimate conclusion but will signal “the beginning of a solution for tackling climate change on a global scale”. 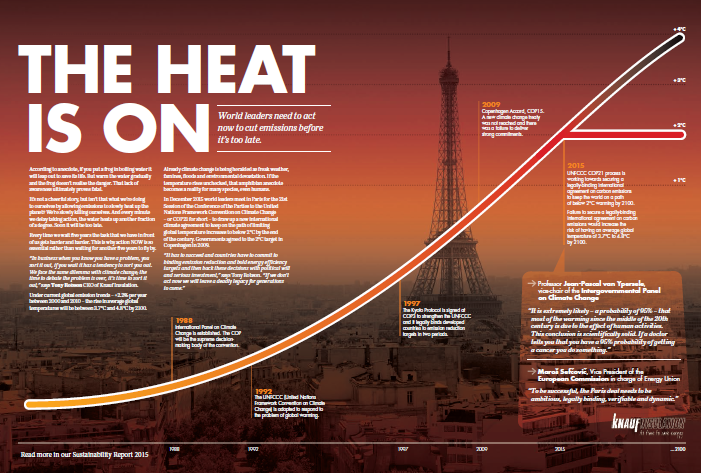 Read more in our Sustainability Report 2015.