The construction industry has rebounded faster than expected from the crisis of 2020 with the strong growth of 2021 projected to continue for at least the next two years, even if in a more moderate pace.

Commenting on the state of the industry, Knauf Insulation’s Head of Market & Business Intelligence Davide Maiello says: “After the storm of 2020, we are enjoying the economic sunshine of growth. And this sunshine is going to last until 2023 at least.”

Fears that the crisis would inspire an L- or W-shaped recovery have been replaced by a positive V-shaped reality. The industry fell by 5.1% in 2020 and is expected to rapidly rebound by 3.8% in 2021 with a further 3% in 2022, according to Euroconstruct, the economic forecasting network which analyses close to 90% of Europe’s construction market. 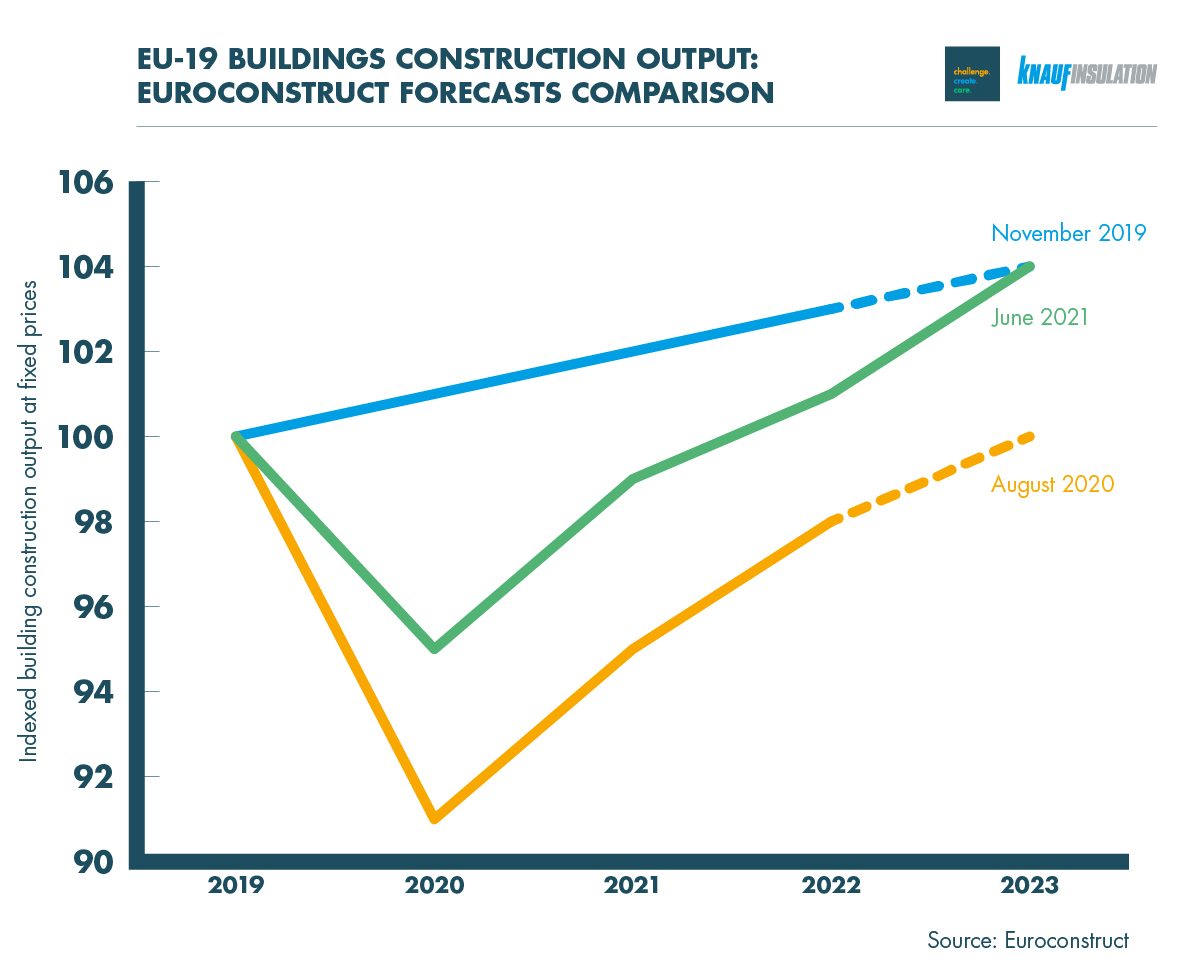 ‘One year of pain, two years of gain’

“It was like construction was in suspended animation for a year and now demand is back. Prices are increasing, investment is high and order books are well-filled. There is no question that this is a strong long-term positive recovery,” says Davide.

“The forecasts are more positive than we expected and output levels of 2019 will already be in place by the end of 2021. One year of economic pain for two years of economic gain, nobody could have anticipated that in 2020.”

The industry’s rapid bounce-back from the pandemic is significantly different to the devastating impact of the 2008-2009 financial crisis when it took almost a decade for construction to fully recover. 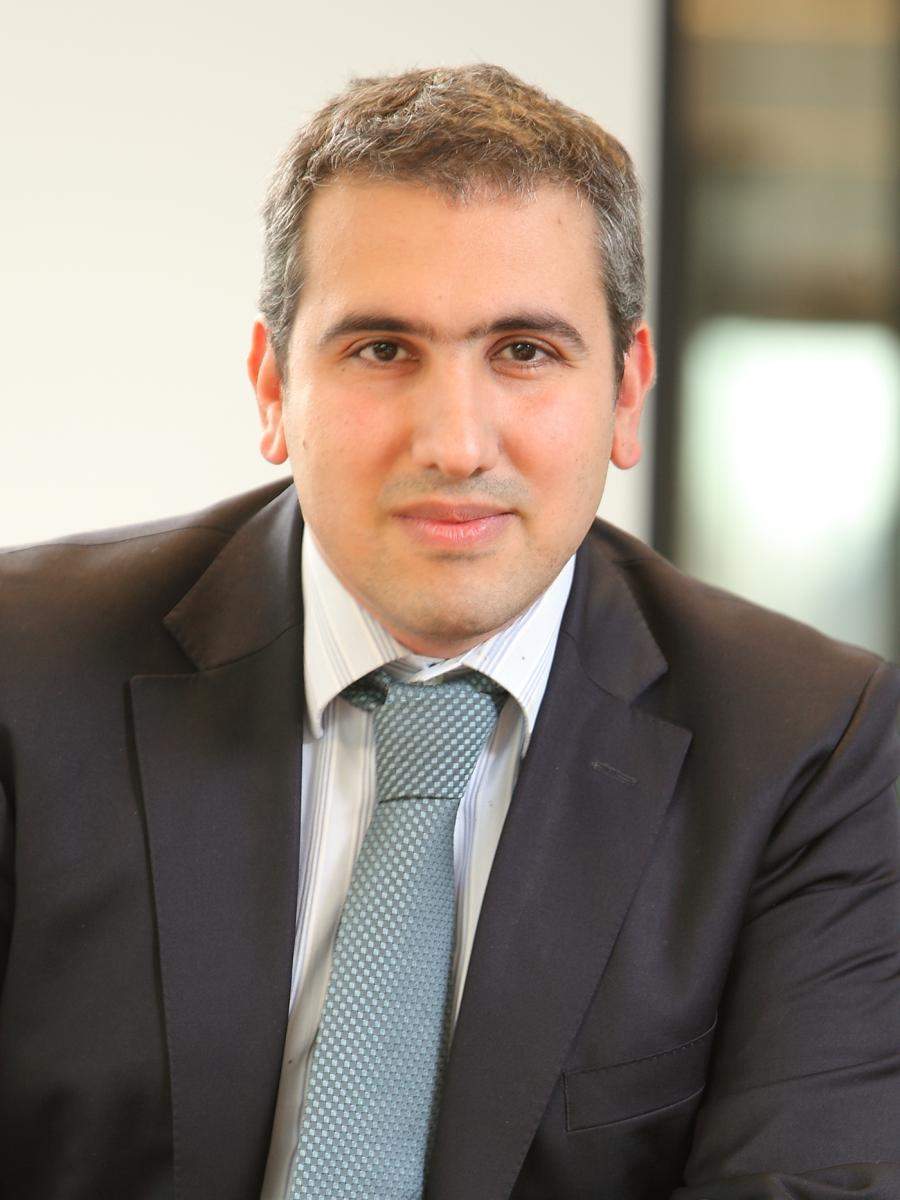 Several factors ensured a fast recovery compared to 2008. Significantly, residential and financial sectors were not the key causes of the crisis, unlike 12 years ago.

And finally, in an environment of low interest rates, housing markets were more mature with developers capitalised and more experienced. “The industry has grown up and like any adult we do things differently now compared to the past,” says Davide.

Construction is an industry that is slow to innovate, but the 2020 crisis has also significantly accelerated change. Many elements have been fast-forwarded, says Davide, such as off-site construction, prefab and modular building and the increasing use of technology and digitalisation.

Sustainability has also taken centre stage with Europe unlocking finance for initiatives that will pave the way towards its ambition to be the first zero carbon continent by 2050. Most significantly, Europe’s Renovation Wave’, is a historic commitment to renovate 35 million European buildings by 2030.

“In order to achieve zero carbon in 2050 in Europe there would be needed estimated investments for at least 28 trillion Euro and 30% of the capital expenditure has to be spent on buildings. We are seeing an increased focus on energy efficiency, circular economy and renovation in our industry and by 2030 the amount of money spend on renovation could be double what will be spent on new buildings,” says Davide.

Rise and rise of residential buildings

Over the past year there have been favourable financing conditions and housing support measures from governments and the highest levels of household savings in years.

“We have been constantly proved wrong by the residential market. We thought we had reached the ceiling in 2019, but we have not. And during the crisis we thought it would take four years for the residential market to recover, but it has only taken two. Property has always been seen as a safe haven in a crisis,” says Davide. “Consumer confidence and GDP were impacted by corona but not residential real estate.”

Mixed impact of crisis on non-residential

It is a very different picture in the world of non-residential. Overall the sector dropped -7.7% with a drop of -8.4% for new non-residential, but the impact was mixed. Offices, retail stores and hospitality buildings have been shaken to the core while others thrived such as health, education, storage and distribution buildings. The rebound will be here less strong with 2021 rising +1.5% and continuing to grow +3.3% in 2022. 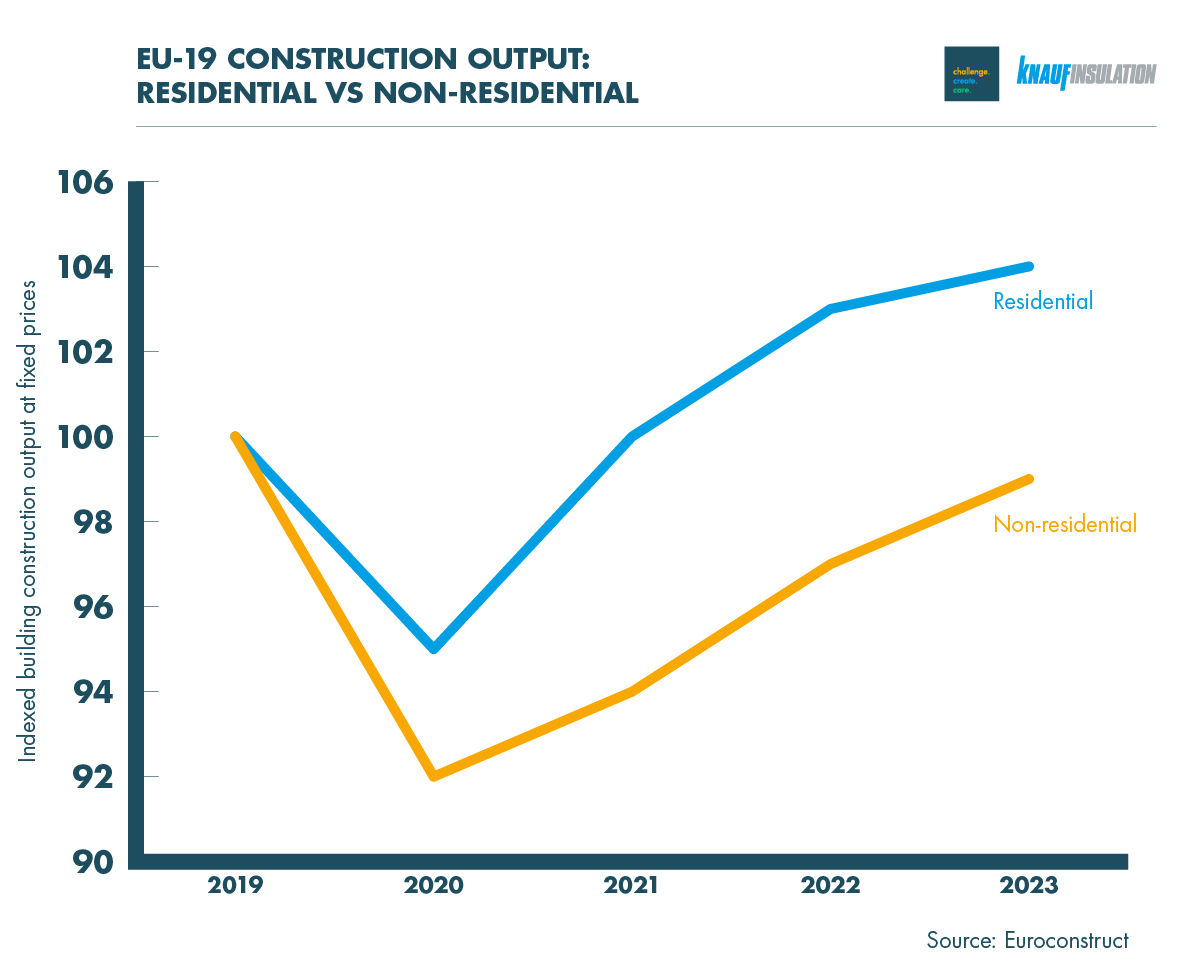 However, if the long-term forecast is sunny, there must be some clouds on the horizon?

Davide says there is a danger of over-pricing and concerns about when government support schemes expire. There is also a shortage of construction materials which is pushing up prices and increases in construction costs, but there is no certainty that these prices will be sustained long term.

“The crisis has also highlighted age-old problems facing the industry such as an aging workforce, lack of skills as well as health and safety, these elements will act as an alarm bell, a call to action and an opportunity,” says Davide.

“The companies that solve these challenges will ensure a more solid base for the future of the industry and be more successful than those that do not adapt. Companies such as Knauf Insulation are coming out of this crisis stronger than ever, well-trained and ready to run faster. The future is positive, the mood is optimistic and it is essential we capitalise on the opportunities this sunny economic outlook offers us.”